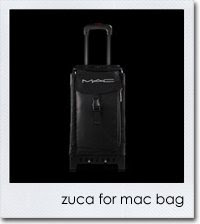 Q: I took a look at the MAC Zuca case the other day in store and it seemed to look smaller then I thought, can it really hold a lot? I have a ton of stuff and really need to update my kit to something thats plane friendly, organizes and holds alot. Does the ZUCA pro seem like a better case? I’m debating whether or not to buy the MAC sport zuca at the store or the online ZUCA Pro.

A: For the ZUCA bag, the dimensions are the same. It’s the same bag re-branded for MAC, and comes with clear-topped containers that really help with organization and accessibility to your make-up items. I do carry an extra set bag when I use the ZUCA bag, but it pretty much fits all the make-up I need. The containers can be filled to the brim and then zipped shut, which you can’t always do with the trays of some other kits. To be plane friendly, a bag also has to fit certain dimensions, and the internal organization of the ZUCA bag is a great way to maximize its space.

If you decide to go with the ZUCA Pro off the site, it does come with plush containers as well, but from what I understand the tops arenâ€™t transparent. It’s totally up to you which one you go with but I believe the ZUCA Pro is on back-order right now, and the one through MAC immediately sold out on the MAC Pro site from what I hear from other bloggers. Keep in mind the duty taxes you’ll have to pay if you’re ordering online from zuca.com since we’re in Canada. That played a huge factor in the ZUCA case I got as I’ve been researching since November. I’m glad I held out – the ZUCA MAC bag totally fits my needs!

Kaysey’s beautiful Big Day in August was the start of my busiest period this wedding season – 5 weddings in 6 days! I’m plowing…